This post is part of a series that profiles some of the exceptional leaders driving #GivingTuesday movements in their countries and cities around the world.

Jennifer: I grew up in the Dallas area and graduated from Baylor University in Waco, Texas. I began my professional career with Arthur Anderson in 1991 and spent 10 years in the Dallas unit of the firm’s audit practice. I joined the United Way Metropolitan Dallas team as CFO in 2001. In 2011, I was appointed President & CEO – and continue in that role – now an endowed position called McDermott-Templeton President and CEO. My parents were very involved in the community and supporting Baylor – our “family school” – they were tremendous role models for me and my sister, Laura.

In addition to being a founding member of the United Way Women of Tocqueville Society and a sustaining member of the Junior League of Dallas, I serve in volunteer leadership roles with several non-profit and civic organizations.

Susan: I grew up in Midland, Texas – a smaller city about 250 miles west of Dallas. As with Jennifer, I learned about community involvement and volunteering from my parents. I went to college in Colorado and eventually moved to Dallas, which has been my home for 27 years. My entire career has been in the nonprofit sector, focusing primarily in children and family services. I joined the United Way Metropolitan Dallas team in 2009 as the Senior Vice President of Community Impact and now serve as the Chief Strategy, Impact, and Operations Officer. In addition to my professional positions, I’ve served in several volunteer leadership roles at the local, state, and national levels.

Jennifer: I read “Understanding New Power” in the Harvard Business Review in early 2016 and saw that the United Way “system” was used as an example of “Old Power”. That didn’t feel very good and I wanted to learn more. So I called Henry Timms and asked to meet with him when I was in New York in July 2016. In that meeting, Henry challenged UWMD to take on the role of facilitating #GivingTuesday in Dallas. While there were just about 4 months until the 2016 day, we decided to say “yes”. We learned quite a bit in that first year, incorporated our learnings in our 2017 venture when we achieved the title of “most generous community in the nation”! But we are still learning and one of the hopes from that first conversation with Henry was to recruit other United Ways to get involved. At this year’s #GT Summit, which we hosted in Dallas, I was so proud to see several of my United Way colleagues from around the country there. This movement is really moving – even in the “old power” dominion of United Way!

Susan: Jennifer called me right after her meeting with Henry in July 2016 and we agreed to take on his challenge. I have to admit, it took me a little while to really wrap my head around the #GivingTuesday concept. I had to take a step back and adjust my thinking beyond my “United Way” lens and then help others see the opportunity to really embrace the movement.

I am convinced that almost everyone wants to connect, to give, and to make a difference. But they don’t always know how to do so. #GivingTuesday captures that human need to connect and engage and gives everyone an opportunity to be a giver.

Q: What has worked well for #GivingTuesday in Dallas so far?

Jennifer: While we may have started out small – we always thought and aimed for BIG. We set really ambitious goals – and that’s critical. In 2016, our first #GivingTuesday campaign year, we set at goal of 10 Million “impACTS” – which recognized dollars, volunteer hours, and other donations. We fell a little short of the goal – logging 8 million impACTS. We were proud of our first effort, but we knew we could do more!

In our second year (2017), we set the goal of achieving the title of “Most Generous City in the Nation”, and we are delighted to say we achieved our goal and very proud of Metropolitan Dallas. We celebrated $22,814,348 and 484,445 volunteer hours. #GivingTuesday was the perfect public forum to recognize more than 20 corporate partners that announced their 2017 employee giving campaign results on that day. These partners were excited to be part of the celebration and pleased with the recognition of their incredible generosity.

And the awareness and momentum generated continued support through the rest of the year.

This year we expect to celebrate an additional 20 corporate giving campaigns as part of the #GiveBIGDFW campaign.

Susan: We’ve also seen growing engagement from our nonprofit community. In the initial year, we had just about 100 nonprofit organizations participating in the #BigDGives campaign and in year 2 we had over 200. This year we expect to have more than 500. And we’ve extended the reach of our campaign to include the entire Dallas/Fort Worth Metroplex –and have changed the campaign name to #GiveBIGDFW to reflect that growth!

Q: What’s the potential or impact of the movement in Dallas?

Jennifer and Susan: Dallas is big — big deals, big ideas, big dreams, and big opportunities. These assets have attracted an impressive and growing cadre of corporate relocations and an average influx of 1,000 new residents per week to the region.

But in addition to being blessed with big growth and prosperity, we are also challenged by big needs. Poverty, homelessness, hunger and health and educational disparities are also part of the North Texas landscape. At times, these challenges seem overwhelming, but we believe we have the collective will, resources, and know-how to take on these issues and make our community a land of opportunity for everyone.

#GivingTuesday’s #GiveBIGDFW is the perfect opportunity to harness the can-do spirit and boundless generosity in North Texas and make a lasting difference for all.

Q: What is one of your favorite #GivingTuesday stories?

Jennifer: Last year, Troy Aikman, legendary Dallas Cowboys quarterback, served as our United Way annual campaign chair. As part of his role, he championed the #BigDGives campaign. He started the day with a very, very early morning rally and volunteer activity making sandwiches for local shelters. And he closed out the evening at our community celebration with more than 1,000 in attendance.

Susan: I loved watching one of the Texas Instruments team members who volunteered to deliver meals on wheels visit with an elderly woman on his delivery route. She was so gracious and so happy to see him – and her gratitude affected him deeply. This was one of those really lovely times when you see that we can be “givers” and “receivers” simultaneously. We are all in this together!

Jennifer/Susan: One of the highlights of this year’s campaign is a focus on multi-generational volunteering – especially engaging families in giving together. Our United Way Annual Campaign Co-Chairs, Rich Templeton, CEO of Texas Instruments and his wife Mary have recruited each of their 3 adult children to host a special volunteer engagement event – giving is a family affair!

In the book, a former Under Secretary of Defense was to give a speech at a large conference. He took his place on the stage and began talking, sharing his prepared remarks with the audience. He paused to take a sip of coffee from the styrofoam cup he’d brought on stage with him. He took another sip, looked down at the cup and smiled.

“You know,” he said, interrupting his own speech, “I spoke here last year. I presented at this same conference on this same stage. But last year, I was still an Under Secretary,” he said.

“But this year, as I stand here to speak to you, I am no longer the Under Secretary,” he continued. “I flew here coach class and when I arrived at the airport yesterday there was no one there to meet me. I took a taxi to the hotel, and when I got there, I checked myself in and went by myself to my room. This morning, I came down to the lobby and caught another taxi to come here. I came in the front door and found my way backstage. Once there, I asked one of the techs if there was any coffee. He pointed to a coffee machine on a table against the wall. So I walked over and poured myself a cup of coffee into this here styrofoam cup,” he said as he raised the cup to show the audience.

“It occurs to me,” he continued, “the ceramic cup they gave me last year . . . it was never meant for me at all. It was meant for the position I held. I deserve a styrofoam cup.

“This is the most important lesson I can impart to all of you,” he offered.

“All the perks, all the benefits, and advantages you may get for the rank or position you hold, they aren’t meant for you. They are meant for the role you fill. And when you leave your role, which eventually you will, they will give the ceramic cup to the person who replaces you. Because you only ever deserved a styrofoam cup.”

I love that story, not least because it loads several meanings and morals into that short cautionary tale. But here’s my favorite of the meanings and morals: by virtue of your presence in this room, you’re the ceramic cup people. We all are.

We are important because of the roles we fill, with our families and in our communities and our organizations. Our city and our state desperately need our roles—and need them executed by the smartest, strongest, most upright and talented people possible.

Chances are that we will all alternate back and forth over the years between ceramic cups and Styrofoam ones. Sometimes our roles come with lots of deference from those around us because of our role at that given moment. And sometimes, even though we’re the same people with the same talents, our roles are supporting ones or advising ones or “executing the plan” ones—and our cups are Styrofoam.

Here’s the message in that story for me: the real leaders are the ones who lead when they’re handed the Styrofoam cup.

Real leaders do the work and support the mission because it’s important no matter who is in charge of it.

That’s what leadership is: you lead from the front, the rear, the middle. You lead without the title of leader and without the acclaim of the masses. You lead because you know how to lead from within a team or separate from it. You lead because it’s the only way you’re wired to live. In the words of the book this anecdote is taken from, you eat last. You make sure the people around you are taken care of and that your community has a chance to thrive.

Susan: Don’t be afraid to just do it – jump into this movement and learn as you go. Reach out to others who are part of the movement and ask for help – this is a tremendously sharing community – tap into it!

Behind the Scenes with Ashleigh Milson, #GivingTuesdayUK 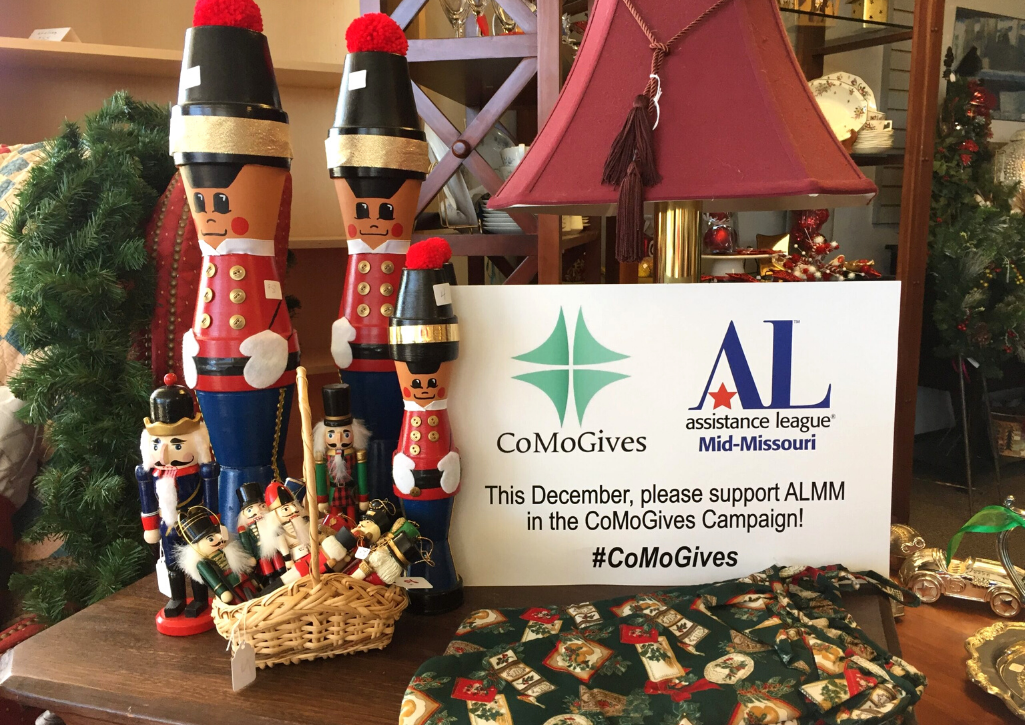 Behind The Scenes: CoMoGives